Approximately 17,000 security executives, analysts, hackers, academics and government/law enforcement staffers from 112 countries filled the Mandalay Bay Hotel for Black Hat USA 2018. Now in its 21st year, the conference was immediately followed by the 26th anniversary of DEF CON, a less corporate, more festival-like conference at Caesar’s Palace that attracted an even larger group of hacker-oriented attendees.

Together, the conferences were a whirlwind of sessions, contests and parties. There were a lot of intellectually curious, technically skilled people on hand, reveling in the duo that has become affectionately known as Hacker Summer Camp.

One of the enterprise security subjects that caught our interest during the conferences was container security.

The popularity of software container platforms such as Docker and Kubernetes has exploded over the past few years, as companies look for ways to get applications to run reliably when moved from one environment to another whether the target environment is a public cloud, a private data center or even a personal laptop. as Black Hat presenter Wesley McGrew pointed out, “This is likely to make life a lot easier for attackers.”

With containers, each application (or process) on a server gets its own environment to run that shares the host server’s operating system (OS). Since containers don’t have to load an OS, they can be created almost instantly. They can be spun up and taken down much faster than virtual machines (VMs)—taking mere seconds to create rather than the few minutes it takes to spin up a VM. They are also more portable, easy to scale and break complex applications down into modular micro-services. The same hardware can support a much greater number of containers than VMs, reducing infrastructure costs and enabling applications to deploy faster.

The application container market is expected to grow to nearly $3 billion by 2020 according to 451 Research. 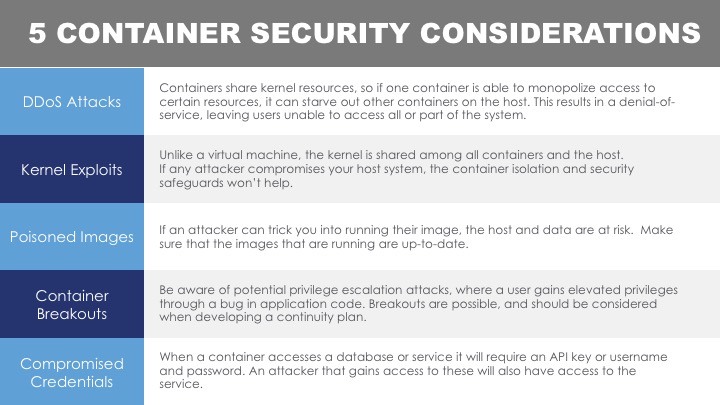 What You Can Do

Security teams need to be aware of container deployments that are planned or in process within the organization. A continuous vulnerability assessment and remediation program is an integral part of successful containerization initiatives.

Container security providers offer tools for organizations using Docker, Kubernetes and other platforms. They provide full lifecycle vulnerability management and application-tailored runtime defense to help secure containers against threats. They can link containers to a predefined set of security templates so they can be created with security policies attached, isolate one workload from another, and prevent successful attacks on executing instances of software in the environment.

Learn more about our Security and Risk Management solutions or contact a Sirius representative today.

About the Author: Chuck Hegarty

Chuck Hegarty is a Senior Security Solutions Manager for Sirius.