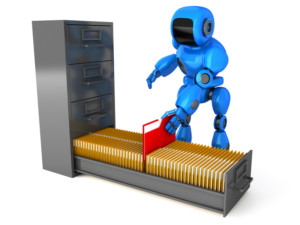 Robotic Process Automation (RPA), the use of software “robots” to speed up, standardize and automate repeatable business processes, has gone mainstream. Historically, RPA has been tied to moving or performing simple manipulation of structured data from a variety of sources such as legacy systems, ERP, databases, spreadsheets and websites.

As RPA evolved, the bots became increasingly capable of applying logic and business rules to transform this data into useful information (e.g., compiling raw financial data from disparate sources into a report for financial audits). This change meant that RPA could, in many cases, could be used in place of BPM (business process management); simultaneously it could replace integrations.

Given the overlap between ECM (enterprise content management) and BPM, it’s not surprising that organizations started looking at how content could be migrated, tagged, sorted and actioned using an army of bots. ECM and RPA are complementary technologies in much the same way as ECM and other process automation tools. The key differences are the flexibility, scalability and time-to-value of solutions built with RPA.

The next step in this evolution has been to deploy bots capable of more complex and analytical functions powered by a layer of AI. While this has been oversold in some cases, the bots’ capabilities have become sophisticated. Not only have the bots themselves become more powerful, but the interfaces used to create the bots have become much easier to use, requiring less programming expertise. This is a key differentiator because it reduces the IT commitment, enabling business solutions that might have died on the vine due to time or cost using traditional approaches.

From an ECM and BPM perspective, there are some specific areas that can be enhanced using bots. Migrations from legacy ECM systems present an example where bots can be leveraged to speed up migration and reduce costs. Another advantage of the bots compared to a traditional programmatic approach is time. Time-to-value has played a major role in driving RPA adoption. Many ECM projects involve integrations with legacy systems, web applications, and custom databases that may be difficult, or too costly to integrate. RPA tools capable of using a “synthetic API” to bridge the gap between sources of information previously impossible to integrate are expanding the possibilities of what can be achieved with RPA.

Beyond the migrations and integrations, bots can help to collect, manage, govern and ingest unstructured content in combination with traditional ECM products. While RPA is not a standalone solution, or a replacement for more traditional content management systems, its ability to intelligently interact with more analytical services makes it a powerful tool for filling in the gaps. Bots can enhance a traditional ECM strategy by helping humans proactively add content to repositories from a variety of external and internal sources.

Given the proliferation of SaaS and the aversion of IT departments to commit to large, unwieldy solutions, RPA provides a new way to rapidly capture valuable corporate content without incurring the costs of a traditional systems integration. RPA empowers the business to become a citizen developer and solve its own problems, while server-based RPA tools with management consoles allow some RPA tools to scale rapidly, allowing the enterprise to deploy new ways to improve processes and explore new business solutions.

For more information about Sirius’ ECM practice, including RPA, visit siriuscom.com/ECM or contact me at greg.kaut@siriuscom.com.

Read Part 2 of ECM and RPA Deliver ROI with an Army of “Robots”.

About the Author: Greg Kaut

Greg Kaut is the ECM Solutions Director with Sirius.