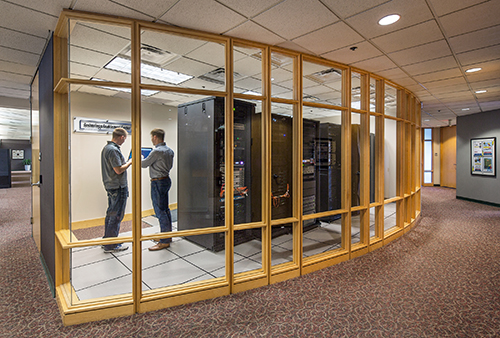 Sirius Technology Enablement Centers (Sirius TECs) have always provided an exceptional environment for clients to see first-hand how various technologies perform in a real-world environment. Sirius can perform vendor-neutral, head-to-head proofs of concept (PoCs) that let the client decide which solution would be best for their environment.

In 2015, a Sirius client that’s one of the nation’s largest financial services holding companies wanted to identify a flash storage platform and strategy for their new data center. Because of the change control processes and different levels of approval required to get PoC equipment installed into their test data center, the process would have taken many months of conventional competitive analysis, and six to nine months for the required PoC gear to get installed before they could even start testing. In fact, due to the amount of software and hardware that would be required, the client’s IT team estimated it would be mid- to late 2016 before they could even begin testing.

The client wanted to compare flash storage solutions from IBM and EMC in a controlled environment that would closely resemble their current software and hardware set-up. The client came to Sirius and tasked us with designing a plan that would test performance, operation/integration and management aspects of different use cases for flash, including IBM DB2 and database, VDI, and VMware. Sirius stood up a complete storage test environment in its Charlotte, North Carolina TEC that included EMC ViPR Storage Resource Management (SRM), ViPR controller, EMC VPLEX  Metro and Local, EMC RecoverPoint, two EMC XtremIO arrays, two IBM FlashSystem V9000 storage systems, and the Atlantis software environment.

Sirius ran more than six different instances of the IDC toolkit scripts from both IBM and EMC, and helped the client analyze the data so they could understand performance baselines for each flash system. After the IDC tests were performed, the Sirius engineering team led four days of testing for each solution, going through the test plan with the client and the respective manufacturer’s representatives. Sirius collected the data for those test weeks, consolidated it and provided the results to the client. It was extremely important for Sirius to keep a neutral position, so aside from providing the raw data, Sirius did not offer any comparative analysis of the two platforms.  Sirius brought in flash specialists for the respective manufacturers’ systems for each of their testing weeks to ensure the platforms were being tested and performing appropriately, who remained available to highlight key points and answer questions.

The PoC was deemed a great success by the client. Sirius was able to provide the operational, integration and performance data for both platforms so the client could complete the analysis for themselves. This was as much a test of Sirius and how we execute on such an important and politically charged task, as it was a test of different flash storage systems.

The PoC led to the placement of a large flash storage order in December 2015, with even more planned for 2016. It also reinforced Sirius’ reputation as a partner that is willing to invest significant resources and time to ensure success. According to the client, “Sirius set a new standard for what a partnership should be.”

For more information about how your organization can benefit from using the Sirius TECs, speak to your Sirius representative or Contact Us to learn more.

About the Author: Jeannie Kemper