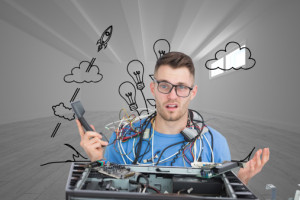 “I LOVE managing multiple small servers just to implement one business function” said no one, ever.  Until recently, the only way to scale SAP’s HANA database  to bigger than a terabyte or two was by using multiple “scale-out” servers in a cluster. Now that servers have much larger memory capabilities (the one must-have for HANA), you have the ability to run a large HANA instance on just one server and operating system.

To reduce complexity, SAP recommends that you should scale up HANA as much as you can before you consider scaling out. And with SAP’s ongoing focus on reducing the memory footprint for HANA, you’ll be able to scale up even more in the future.

Sometimes bigger is not only better, it’s easier.

SAP HANA is built on an in-memory columnar store that optimizes the benefits of multi-core processing and single-instruction, multiple data (SIMD) instruction sets. This system uses intuitive modeling tools, decision tables and pre-configured function libraries to help users avoid latencies from moving data between the database and application servers. You can set up multitenant database containers or multiple production LPARs on one server.

Late last year, SAP announced even more support for HANA on IBM Power with the SAP Business Suite 4 (S/4HANA). If you are considering whether to continue hosting your own SAP HANA in-house, or running it in the cloud, you should know that this added support plays a big role in the ability to scale workloads. With support for up to 4.8 TB per HANA instance running on a POWER8 server (and that’s using only half of the cores in the Power Systems E880 server), SAP HANA breaks into the “Big Boy” club of in-memory database on a scale-up SMP server. And the E880 server can now be ordered with 192 cores and 32TB of memory (mic drop).

Furthermore, LPARs running SAP Business Suite can now have up to 9 TB of RAM, and up to 96 GB per core (the current limit, with high hopes for much more soon)! Read more about the features and benefits of SAP HANA on IBM Power Systems servers here.

Sirius and IBM are working together to help organizations accelerate their business and provide a competitive edge, so they can innovate like never before. Connect with a Sirius representative today to get started.

About the Author: Mark Parmer